A Dog with a Belly Button

If you’re like me at the start of springtime, you’ve got your mind on Christmas. Okay, maybe you’re not like me, but today I’d like to share a story with you that is both inspired by and brought to you by, you guessed it, Christmas.

Oh boy, do kids love Christmas. Am I right? Even as an adult, it’s still kind of exciting. I don’t take part in many Christmas traditions, but I do look forward to seeing the big tree downtown at Daley Plaza with Steve. Then we walk to Macy’s and pick out some funny ornaments for our own Christmas tree. It’s not a Christmas vacation, but it’s always a day I treasure.

Enough about Steve, for Pete’s sake! Let’s talk about someone jolly who wears a velvet red suit. No, not Steve…it’s Santa Claus. If you’re a little kid, please skip the rest of this paragraph. Seriously, stop reading now, this isn’t for you. Okay, are the tykes gone? Good. I know as adults we don’t believe in Santa. We know Santa was Mom or Dad and even we play Santa these days. I am telling you, I met the real Santa Claus. Yeah, he’s real. The real Santa Claus was at the Kroger grocery store in Sterling, IL back in 198—ahem! Here’s how it all went down:

Alright, Kids! It’s okay to join us again! Here’s the story of how Jeanne met Santa Claus back in 198—ahem! If you grew up a poor kid, you know that Christmas can be rough. Heck, every day can be rough, but Christmas especially. I’ve mentioned before that my Mom was a single parent and funds were extremely tight. I would like to share though, I can’t remember having a bad Christmas. My Mom is a master craftswoman and she made us some pretty cool stuff. I don’t know how she managed it, but she did buy us some stuff, too. We always got something we wanted and never felt bad about it.

Paul and I would go to the mall and put our coins together to buy Mom something nice. If you are a fan of “The Andy Griffith Show” you may remember a scene when little Opie is trying to choose a gift for Aunt Bee’s birthday. He only has a dollar or two to spend and he wants to choose something nice. He is stuck between the salt-and-pepper shakers or the baseball hat. Both very thoughtful gifts. What did he choose? Well, you’ll have to watch the episode. (The Bed Jacket, Season 3, Episode 12) 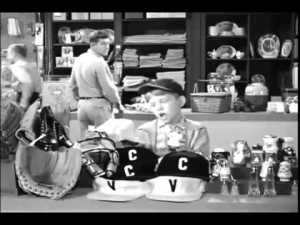 Back in Sterling, Woolworth’s at the mall had everything. We could get Mom a goldfish! She’d like that! How ‘bout this hula-hoop? Nope, we decided on the coffee mug that plays Jingle Bells in a piercing digital tone. We were pretty excited about such a great gift. That mug played Jingle Bells for more than 20 years. A treasured gift, for sure. Once, I walked to buy Mom a Christmas gift all by myself. It was a small town, it was alright. I picked a wooden penguin ornament. It was probably 3-inches tall. Well, I was so excited about that penguin that I gave it to Mom as soon as I got home. Whoops. It still hangs on her tree. I knew she’d like it as much as I did.

Hey, I thought this was going to be a post about Santa! What gives? Alright, I’m getting there. I’m trying to paint a picture here. I can’t remember if Mom and I walked to the Kroger grocery store or drove. It was winter, so we probably drove. Before we left, I helped Mom roll coins into paper sleeves to pay for groceries. I guess I was old enough to know that paying with rolls of coins was horribly embarrassing. I was just a kid, I didn’t understand. My Mom went to the service counter to exchange coins for paper money and I got as far away as possible. I think oranges and apples appeared quite interesting to me at that moment. As I was waiting for Mom, guess who walked up to me? C’mon, guess! It was Santa!! Although I wasn’t afraid of Santa, he did make me a little tongue-tied…hard to believe, I know. I mean, this was an important person after all. Here was a person who I only saw once a year, but left presents at my house! You have to choose your words carefully with such a VIP. I looked up at Santa and he handed me the obligatory candy cane. It wasn’t even broken. You’ll never guess what he asked me. Ready for this? He asked me what I wanted for Christmas!! There was only one thing I wanted that year. Of course I had looked through both the Sears and JCPenney catalogs and circled dozens of things I’d never heard of before. Who didn’t do that? But what I really, really wanted was that plush dog sitting on the customer service counter right where my Mom was standing. I didn’t even know if that dog was for sale, but for some reason it spoke to me. Maybe it was the stitched-on belly button. Santa nodded, told me to be a good girl and we parted ways.

A couple of weeks went by and it was Christmas Day! A couple of weeks in a kid’s life are like an eternity. I didn’t do any research here, but I’m guessing a kid doesn’t remember much about 2 weeks ago, especially around the busy holiday season. That stuffed dog was not on my mind that morning. I was just excited to see what Santa had brought. Paul and I were pretty easy to please as far as that went. We got what was going on and accepted it. We weren’t totally stupid. (Well, I wasn’t.    C’mon! He’s my big brother; I have to call him stupid!) Paul and I waited at the top of the stairs for my Mom to get ready. The deal was we all went down the stairs together. Yeah, no one is calmly walking down the stairs on Christmas morning. Being the accident-prone child that I was, I probably already had huge band-aids on each knee to cushion my fall, but no one fell down that morning.

When I got to the tree the first thing I saw was that plush dog from Kroger! He was sitting under the tree with that cute half smile, waiting to hug me! Santa remembered! Santa remembered! I was thrilled. Not sure what else I got that year, it really didn’t matter. I totally bought into the Santa magic and believed for many more years. Even when I figured out Santa was Mom, I was convinced the “real” Santa was at Kroger.

Oh, no…that’s not the end of the story. Many years later, I asked my Mom about that dog and Santa. At first she didn’t know what I was talking about. She didn’t remember the dog, but she remembered Kroger Santa. As I mentioned earlier, Mom and I were not together when I talked with Santa. He didn’t know who my Mom was; he probably just figured I was another kid in the store. After he spoke with me, he continued on his way and eventually met Mom. This was after Mom had just turned in coins for paper money. She was feeling down, as you can imagine. Santa gave her a non-broken candy cane and asked her if she had been a good girl that year. Mom said she teared up right away, as she was trying so hard to provide for the 3 of us. Santa gave her a hug and made her smile. He was probably one of the few adults that had been nice to her in a long while. Being divorced in a small town in the 80s wasn’t easy. Everyone knew the story, or thought they knew the story. Santa never told Mom I wanted the dog, he was just nice to her for a moment when she needed it. See, I told you he’s the real Santa.

Mom saw the dog at a later time and thought I would like it, so she bought it for me. Again, it was probably the stitched-on belly button. She had no idea I had asked Santa. I have no idea who that man was in that Santa suit, but I know he was a good man. And I know my Mom is good, too. It’s really a story about all three of us: me, Santa and Mom. Three nice people who were at the right place at the right time. The proper ingredients for a Christmas miracle. I’m sure Santa has no idea how his casual actions all those years ago have stayed with me and Mom. What a beautiful thing he did for two strangers at the grocery store. I’m sure Santa doesn’t remember us, but I think of him every Christmas when I see those imposter Santas at the mall. I have met the genuine Santa Claus and my Mom did, too.

Do I still have the dog?? Don’t be ridiculous, of course I do! Here he is! Magical Santa Kroger Dog! Best Christmas gift ever! 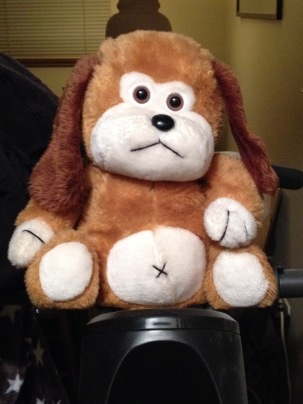