Keep Your Pants On, It’s Going to be Alright!

One of the first things people ask when you get married is, “when are you going to have kids?” And then as time goes on people ask, “Why don’t you have any kids?” I’ve read several blogs about single or married women who don’t have kids. They come across as proud or belligerent about not having kids. Like they are taking some stance against society or something. I’m here to tell you that it’s okay to not have children. Yep, it’s really okay. You may have guessed that I don’t have kids. I won’t bore you with the reasons why, but it’s not a decision I made lightly. Having a kid is a huge responsibility. It seems that many people aren’t up for the task. Leaving small children in a hot car or abusing them so badly that they are not able to function with other people ever again. It’s sad. You don’t have to be smart or rich or responsible to have one baby or ten babies.

That being said, I’d like to talk about love. If you’re a non-mom, you’ll be able to relate to this statement. “You just can’t understand what it’s like to love unless you have your own child.” Yes, people have said it to me and I’ve read it countless times. “You wouldn’t understand, you don’t have kids.” That’s another good one. People don’t necessarily mean any harm when they say this, they just aren’t thinking past their own lives. What I am proposing is that a person without children, including me, is more than capable of experiencing real and profound love. I’m talking about love that you feel deep within your core. Feelings that twist your stomach and fill your soul with buzzing currents of electricity. Oh, you want examples? Don’t worry, I’ve come prepared. Brace yourself for three tales of profound love.

My first story is about my brother Paul. Paul and I lived together in our 20s. I think we lived together for about 7 years. We lived in an awful place that wasn’t very safe. We didn’t have heat in the winter or AC in the summer. Oh, I forgot to mention the bathroom ceiling caved in and water just poured out of it for years. I’m not exaggerating here. Our landlord, John Not-Coola was a very awkward man who had no sense of humor and not a compassionate bone in his body. And he smelled funny. Anyway, we finally got our “shit” together and moved to a better place. Soon after, Paul got a great job…in South Carolina. What? So, we prepared for Paul to move away. Far away. We got a small group together and drove Paul to South Carolina in two cars. It’s about a 13-hour drive. We had fun getting Paul’s new apartment together, but then it was time for me to go home. Everyone else went down to the car and it was just me and Paul. My eyes filled with tears and I told Paul I was really sad to leave him there. He said he knew and we would be okay. It broke my heart to walk away, and it was one of the hardest things I’ve ever had to do. Luckily, we spent a lot of time on the phone and still had a blast together. That was before Facebook and all that, so we still talked to people on the phone back then, kids. I still missed him every day. My best friend. A few years later, Paul moved back home. Yay! I’m sure it’s because he couldn’t stand to be without me. I’m pretty special, you know. 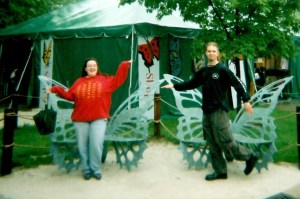 Grab a tissue, here’s the next one. You may remember from a previous post that I had major surgery about 5 years ago. I won’t gross you out with the details, because it is, in fact, pretty gross. I was scared out of my mind. I was pretty convinced that I was going to die. Spoiler alert: I made it. Anyway, Steve drove me to the hospital bright and early that day. He made sure to have some fun songs playing in the car to lighten the mood. My Mom met us at the hospital and I was soon led away to the “back” to prepare. Before I walked away, I handed Steve the ring he bought me and asked him to hang on to it. After waiting around for a torturous amount of time, it was finally time to be wheeled back into surgery. My Mom said something comforting to me about Jesus, which was nice, while the tears were just pouring out of my eyes…again. I thought that would be the last time I saw my Mom or Steve. I remember someone, (I later found out it was my doctor) saying that my turtle tattoo was really cute. “Count backwards from 99.” I thought, “99, 98…” and then I was waking up from surgery. Oh my gosh, I made it! The epidural didn’t take, so I was in a lot of pain. They wouldn’t release me to a hospital room until the pain subsided a bit. About two hours later, I was moved to a room. I was told my Mom and boyfriend were on their way up to see me. I didn’t realize they had actually been waiting for a total of about 8 hours. My Mom walked in the room first and I was so happy to see her! Steve walked in behind her and the tears started again. I was overwhelmed with relief and love. “I’m so happy to see you,” I said. He gave me a big smile and I saw his eyes fill up, too. That feeling was intense. It was happy, sad and almost too much to bear. I will never forget that moment and exactly what it felt like.

One more story to share with you. Of course it’s about my Mom. Several years ago, as I was going through a divorce, my Mom was going through cancer treatment. Mom wasn’t too thrilled with me at the time. Divorce is a sensitive topic in our family. It seems like more and more people are dealing with cancer lately, so maybe many of you can relate or have similar stories. I can still remember my Mom telling me over the phone that she had cancer. I couldn’t believe what I was hearing. My Mom can’t have cancer, that doesn’t make sense. First came surgery to remove the tumor. It was outpatient and she was pretty much fine. We even laughed together that day. At that time, she still looked like herself. She didn’t look sick at all. What really makes you sick is the chemo. That’s when your skin turns grey and your face is bloated and you lose your hair. Seeing my Mom look like that was heart-breaking. Definitely an image that is burned into my mind forever. You’re not supposed to drive yourself to chemo, so I drove my Mom. They would take her into a room where other people were receiving chemo, too. It took a couple of hours, so I would usually get some rest, as her appointments were early in the morning and I worked nights. Then I would pick her up afterwards. She would be okay and we’d go get some lunch. There was one time in particular I’d like to tell you about when she wasn’t okay. I dropped Mom off and went home to nap. I got a call to come back because Mom was really upset. I got there as fast as I could and found my poor Mom pale as a ghost and crying hysterically. She was in a little room by herself off of the main room. I remember the windows were up high and I could see the sun and some purple flowers someone had planted near a tree. I held my Mom’s hand and she told me a doctor told her what her chances for a full recovery would be. My stomach lurched as I waited for the number: 70%. I guess some doctors feel that full disclosure is a good idea, but maybe you wait until someone isn’t hooked up to poisonous chemicals and feeling as low as possible. Mom was already scared, but that just pushed her over the edge into terrified. I told her 70% seemed pretty good to me as we all have a 50/50 chance of making it through today. You just never know what life can bring on any given day. Plus, it’s just a number, not a representation of who she actually is. I told her I loved her and she wasn’t alone. A nice nurse brought her some crackers and juice and Mom calmed down. She told me she was glad I was there and that ignited my heart. As I mentioned, things were a little tense between us at the time, so hearing my Mom say that meant so much to me. “I’m glad I’m here too.” I think of this moment often as it was almost like time stopped during that 30 minute exchange. We were two women helping each other through a horrible moment with real love and compassion. It’s a memory I hold dear. After chemo and radiation, my Mom has been cancer-free. That’s a gift I never take for granted.

What I’m trying to say here is that we shouldn’t tell others what they can or cannot understand. Just because a woman or man doesn’t have kids doesn’t mean they don’t “get it.” Certainly, people with kids have a very different life experience that is filled with love, happiness, anger, chaos, total satisfaction and heavy disappointment. Oh, wait…that sounds like my life, too. And everyone else’s life. Bottom line: we’re all on this planet together and we are all capable of giving and receiving love no matter what sort of packaging it presents itself. A brother, a boyfriend, a Mom, a cat, a baby, an aunt or uncle…it’s all love and it can all be impactful and profound. And there aren’t any diapers to change, nor spaghetti in your hair.