Where Did that Apple Fall?

I like to write blog posts that are humorous and fun to read. I am in a rather thoughtful/melancholy mood lately, so this post may not be as funny as usual. Okay, maybe you didn’t think any of them were funny. If that’s true, I hope you will keep that to yourself for now.

Very recently, something sad happened and I’d like to talk to you about it, if you don’t mind. You all know my husband Steve, right? Nice guy. Well, his father John Sullivan passed away. See, I told you it was sad. Yes, he was sick. He hadn’t been doing well since before Thanksgiving. It has been a difficult time for Steve’s family. On Tuesday March 10th John left this Earth to begin an adventure somewhere else.

Can I tell you a little bit about John? Here’s a bit of what I know about him. He was an only child. He was a respected electrician for many years. He actually had a hand in building many famous structures in Chicago. Sometimes when I drive downtown with Steve he’ll point out a building his Dad helped to build. John married his wife Noreen 57 years ago. They have 6 children. John loved to laugh and had a great sense of humor, hence 6 kids. John also loved animals and eating tasty food.

As you can read from my schlocky bio, I’m missing a lot of information. I only came to be acquainted with John in the last few years when I met Steve. When I met John, he was already an older gentleman and I have to admit, I was a little scared of him. He was very quiet and I felt like I had to impress him, so he would think I was a good match for his son. Due to his quietness and my self-imposed anxiety, we did not know each other very well. While sitting at John’s memorial service last weekend, I felt like I was meeting him for the first time. There were dozens of pictures of John as a kid, a young man, a newly married man, a father and a grandfather. I learned that he had a lot of laughs in his lifetime and touched the lives of many people. But really, who was this man? As I thought about this question, I started to feel sad that I didn’t know John at all. I felt like I had missed an opportunity to know this man that was so well loved by so many. But, wait a minute…

Steve is extremely personable. I am always so proud of him when we attend a party or dinner and he can talk to anyone. He is everyone’s buddy. When we attend a huge event like a concert where there are thousands of people in attendance, Steve will run into someone he knows or meet someone new. People easily share personal information with Steve. A guy came to our house to fix the dryer. Next thing I know, this man is telling Steve about his Dad passing away. The nice man who fixes our cars has told Steve all about how his wife beat cancer. Strangers feel that they can trust Steve. People seem to recognize a friendly spirit in him. I learned recently that everyone at John and Noreen’s church loved him. John reminded all of these kind people of their own grandfather. He had a friendly spirit, too. 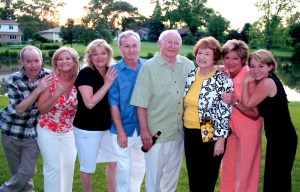 Did I mention that Steve has a joke for every occasion? I’m not kidding. Steve is able to get a joke into most every conversation. I’d say 98% of them are even funny. Here are some examples of random joke subjects: Spelling bees, dentist appointments, putting a shirt on, Easter Sunday, eating a snack at a hockey game, etc. Just like his Dad, Steve loves to laugh and loves to make others laugh. Bringing laughter and humor into this world is important to Steve. Maybe that’s why everyone likes to hang out with him so much. The very first time I met Steve was in a room full of strangers. (I was auditioning to be in his band.) He put me at ease by making me laugh. Maybe that’s why I sang so well and I was hired to be the band’s singer. It’s possible.

Steve loves animals. Upon meeting Steve, my cat Sadie was full of hate and rage. She has always been skittish, especially around men. I’m talking about “I will kill you” hatred. She would hiss and bite at him no matter what he did. Most people would have thrown their hands in the air in defeat after a couple of days. Steve tried to win Sadie’s heart for over a month. It wasn’t always easy and I thought one (or two) of us was going to have to go, but she very slowly came to trust him and now they are the best of friends. She just needed to train him. When we go to a friend’s house Steve can always be found petting the dog or cat. Just recently we acquired a set of squirrel friends who hang out in our yard. We can stand at the window and watch those little guys all afternoon. Here’s a story I thought of recently: During the stressful planning of our wedding, I was waiting at our wedding locale (Steve’s sister’s house) for the tables, chairs, dance floor and tent to be delivered. Whilst waiting, Steve’s parents came to the house for a visit. Right before they walked up to the patio, I noticed something small and fuzzy on one of the patio chairs. It was a baby hummingbird! He was so cute and barely the size of a golf ball. When I pointed out the bird to John, his face lit up. He was talking to the bird and insisted we find a little box to put him in, along with some sugar water. It was really touching to see. Very soon after, the Mama hummingbird came to get the baby. That was a beautiful sight, as well. 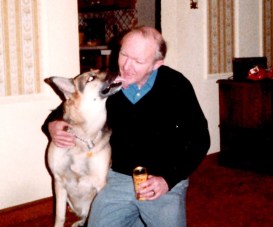 Although Steve isn’t big on eating, John was. He loved snacks, treats, dinners, lunches…whatever you had. When the food was on, no need to ask John twice, he was happy to fix a plate and dig in. John was the best man at our wedding. I remember about an hour after dinner had begun, Steve found me outside and told me his Dad thought it was time to cut the cake. People were finishing up with dinner and wanted cake. A man after my own heart! Let’s get to the cake already! It really was a fabulous cake.

Maybe I didn’t know John very well personally, but he has certainly touched my life in a dramatic way. He wasn’t a perfect man, he made some mistakes along the way, but overall, he brought a lot of happiness and laughter into this world. I’m lucky to see the best of John every day in Steve. I think John would be pleased to hear that. Although John is physically not with us anymore, the silver lining is that I actually did know him pretty well and I’m still learning more about him every day through Steve. What a beautiful gift, don’t you think?