And it’s killing you, too.

Back in the day, when someone was a known criminal or evil doer, the townspeople would get together and hunt them down. There always seemed to be a surplus of pitchforks, so everyone could carry one as they ran. (Not very safe, people of yesteryear.) Some folks with very good balance and short hair could carry both a pitchfork AND a torch.  Yeah, an open flame. This angry mob would get themselves riled up at Farmer Jenkins barn and then run through the streets screaming and crying out for the mischief maker. Getting the hell outta Dodge was probably the best idea for the troublemaker if he wanted to avoid the tarring and feathering that came next.  Ouch.

Luckily, tar and feathers aren’t used as much anymore, but that angry mob mentality is still very much alive in our society. Even in polite society, if there is still such a thing.  Our standards for others are so high that we are instantly outraged with any mistake, large or small. No one is allowed an error anymore. Especially if you have any sort of celebrity status. Yes, of course I have examples.

If you are a follower of this blog, you will know that I’m not a fan of the Oscars™.  (I put the TM in there to be funny.) I am an avid movie watcher and I appreciate each and every person who is involved in the making of a film from best boy to starring actor. (What does a best boy do anyway?) That being said, I don’t like a group of elite rich folks telling me what movie is the best. The whole process is fixed and ridiculous. Here’s Adam to tell us why:

Should filmmakers be recognized and awarded? Certainly!  How about we let movie fans vote or let professionals be judged by their peers in a non-televised event?  They can tell us about it afterwards. We can write them letters and tell them they’re great. (Thanks Joe Walsh!)

But I’m straying from the point here. If you were awake on Oscar night or the next morning, you heard about the Best Movie announcement “epic disaster.” No, there wasn’t an earthquake or violence of any kind, but Warren Beatty was involved. Mr. Beatty and Faye Dunaway were tasked with presenting the award for Best Picture. They were given the wrong envelope and subsequently announced the wrong movie as the winner. A few minutes later, the mistake was realized and the correct film was announced. People were disappointed, I have no doubt, but everyone is okay. No one was taken to the hospital, the roof didn’t collapse and no one’s “goodie bag” was taken away. Later that evening, it was announced that the two accountants from PriceWaterhouseCoopers handed Mr. Beatty the wrong envelope.

These two people were instantly vilified in the media. As per usual, folks who were unaffected by the accountants’ actions were crying for the accountants to be fired immediately and banned from the Oscars for the rest of their lives. And we should all get to throw an egg at them. Brian Culllinan and Martha Ruiz apologized many times and said they were “devastated” by their error. It was revealed that Mr. Cullinan was engaging in social media right before this fateful error, so that makes it even worse for some reason. If he had just been standing there picking his nose, would that make it okay? In an admirable twist of fate, PriceWaterhouseCoopers did not fire the two accountants. They are quoted as saying it was an “honest mistake.” The two accountants lost their gig at the Oscars, but their company kept them on.  An honest mistake.

Remember that guy? Ryan Lochte is an Olympic swimmer. He has won 12 Olympic medals and currently holds four world records. That’s pretty fantastic and he did it all before he was 31 years old. This guy knows what he’s doing in the pool. 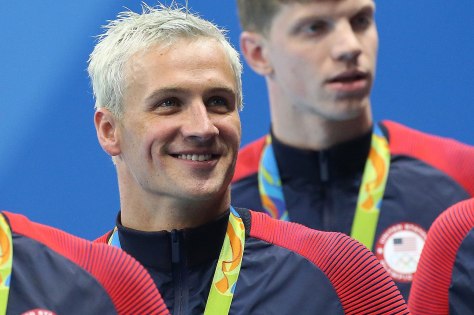 Then the 2016 Olympics in Rio happened. Ryan was finished with his events and went out on the town with a couple of his teammates.  Four young men at the top of their games partying in Rio. They got drunk, they did dumb stuff. Lochte was accused of vandalizing a gas station bathroom. A security guard pulled a gun on him and the others to make them stop. Lochte handed over some money to pay for the damages and the story got way out of hand from there. So, Ryan was probably upset about the incident and told his Mom about it over the phone, but he didn’t tell anyone else. Somehow, a FoxNews reporter heard about the incident and reported it. The International Olympic Committee and Ryan both denied the allegations, but then there was the video footage.  Whoops. So now Ryan was caught lying to his Mom and possibly the Olympic Committee and now had to save face in front of the media. So, he did some creative storytelling.

Everyone turned on Ryan in a heartbeat. He was a beloved American athlete the day before, but now he is the scum of the earth. He finally admitted his wrongdoings and was quite severely punished.  He was banned from professional swimming for 10 months, he would miss the 2017 World Championships, he was not allowed to visit the White House with Team USA and he had to forfeit $100,000 dollars in bonuses.  He also lost most of his endorsements, including Speedo USA, Ralph Lauren, Airweave and Syneron Candela. ESPN estimated he lost a total of 1 million dollars.  But I’m sure it was way more than that.

Did you ever lie to your Mom when you were in your 30s? Did you ever get drunk with your friends and do something really, really stupid? Well, I did. (Sorry Mom.) Thank God there wasn’t social media during my public drinking days. So glad I don’t have to relive those moments with the world looking on. I get it, lying is terrible, especially when acting as an ambassador for your country, but I feel the punishment did not fit the crime. He didn’t tell everyone what happened, his mom did and then he was forced into a precarious situation.  Now instead of being remembered for being one of the best and most decorated swimmers in the world, he’s that swimmer who lied in Rio. Everyone on social media ganged up on Ryan, judging him harshly for making a choice we might have made in that situation. It’s hard to know what you would have done until you’re in that exact situation.

It’s so easy to be anonymous on Facebook. Just yesterday I was scrolling through my newsfeed and I saw a news article about a celebrity speaking out against Trump. A person I know personally and love commented on the article in a very startling and vulgar way. It made me very sad. I know my friend would never speak to someone like that in person. Not in a million years, but on Facebook, it’s okay. I have other friends, people I love mind you, who constantly pummel Facebook with political posts that judge the current administration harshly. Although I don’t agree with most anything Trump says or does, he’s not even being given a chance to say or do anything. He is constantly met with a mob of folks ready to burn his house down. And then there’s an equally angry mob of Trump supporters who will burn everyone else’s houses down. It’s a constant ping pong match on social media that I’m tired of looking at.

You may be thinking that I should just stop logging onto to Facebook. You’re probably right, but like you I am addicted to it. It’s something to do while I’m bored. I like hearing from my friends that they like my writing or my band’s video. I like seeing pics of people’s dogs and cats doing silly things. I try to scan past the negative and rejoice in the positive. I’ll listen to the news in my car and watch on TV when I get home. I’m not looking to be totally ignorant of the world’s events, but I can’t rely on Facebook as my sole and correct news source. I can’t join that angry mob. I want to hear every side of the story and make my own conclusions. I’m not going to demand that accountants resign from their jobs for making a mistake. I’m not going to sign a petition to ban Ryan Lochte from swimming for the rest of his life. I’m not going to take on your political crusades because you think I should.

What I’m getting at here is that you should think for yourself. I certainly encourage you to share your thoughts and views with others and then listen to their thoughts and views. But do it in person. Go to a town hall in your neighborhood and speak your mind. Let your voice be heard by the people who need to hear it.  But, before you speak, take some time to carefully consider your position. Did you gather all of the facts about the story? Did you put yourself in the same situation and think about what you would have done?  Can you forgive another human person? Does this issue greatly affect the outcome of your life? How about a little less judging and yelling and a little more compassion and thoughtfulness? Also, please do some research and check your facts BEFORE you share and rant.

And some pictures of your cat would be appreciated.